At about 5 am I was woken by the rumbling roar of a lion. A lion’s roar is a potent sound that can travel many kilometers making it a great communication tool in the African savannah. From a distance it has an impressive, throaty quality; from close it feels like it can swallow the earth.

Over the next half an hour the intermittent roaring became louder. Eventually I could hear the lion making it’s way through camp maybe 50 meters from us. Then it roared. The power and volume shook the rooftop tent and made my blood turn cold. It’s certainly not the first time I’ve heard a lion roar nearby, but there’s an ancient, primitive feeling one gets being so close to a predator so wild and so powerful. Suddenly there was silence. When I next heard it roar it had moved away some distance again. Leo slept through the whole thing and was VERY annoyed that I didn’t wake him up to hear it. Next time I will.

I travel with a rooftop tent, and have been doing so for years. More than anything I find it offers a practical, compact and convenient solution for my type of camping trips. All I have to do is park my car on level ground, open the rooftop tent, throw in my sleeping bag and I’m set. The only potential hassle is the issue of space – ground tents offer a lot more room to manoeuver than rooftop tents. This becomes particularly evident during rainy days in the bush. Ground tents can also be pitched away from the vehicle (perhaps in a particularly special site where your vehicle will not fit or cannot reach – although obviously this depends on the campsite you visit).

After breakfast Leo and I explored the roads in the vicinity of Third Bridge. The water levels in the swamp were not very high and so we drove most of the tracks and water crossings without first testing the depth for our vehicle.

Water levels in this region of Botswana depend on the height of the seasonal flood, which in turn depends on the rainfall in the Angolan Highlands catchment area almost 2000km away to the northwest. Its important to note that the presence of high water doesn’t necessarily have to do with local rainfall – the skies can be blue, the days hot and there doesn’t have to be a cloud in sight – for the water levels to rise dramatically. Although obviously the local rainy season does play its part. In general the water levels peak in Mohembo (at the start of the panhandle at the border between Namibia and Botswana) between the middle of March and May. This water works its way into the river systems feeding the great Okavango Delta. As the gradient is slight, the process takes some time. After the dry season the swamps soak up the first floodwaters resulting in a delayed flooding further into the Delta itself. Thus water levels almost everywhere in the Delta are highest from May to August.

During the day we explored the area surrounding Third Bridge, driving many of the tracks in search of wildlife and beauty. We took it slow being in no rush to go anywhere. There are many minor tracks in the area, some of which can get quite sandy – but nothing too difficult. We drove first roughly southwards for a while (with the swamp to our left) and saw many grazers. Then we turned northwards again and drove in the direction of Xakanaxa. This is a beautiful drive. Again we saw many grazers, but also buffalo, elephant, giraffe, hippo and crocodile. 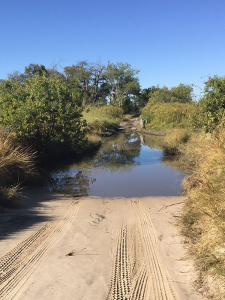 After returning to camp we prepared supper (chicken curry with rice), played cards and chatted. It was almost dark when we heard the sounds of hippo activity from behind the trees. A few minutes later two huge hippo lumbered into the opening of our campsite. We sprang from our chairs and darted behind the trunk of the nearest large tree. Hippos are enormous and have the reputation for killing more people than any other animal in Africa. Weighing around 2 tons they can grow 4 meters in length, stand 1.50 meter high and have 40cm long canine teeth. They can be territorial, grumpy, unpredictable and pig-headed. Fortunately these two moved off, chasing each other with bellowing and ‘neighing’ noises that I would not have expected from hippos. It took Leo and I a while to get the adrenalin out of our systems before we were able to go to sleep.

We left Third Bridge for North Gate Camp (Khwai), which is only 60km away. Driving north again towards Xakanaxa there were many tracks and we took it easy. The wildlife in Moremi is spectacular with almost every animal under the African sun living in the region. Located in the eastern part of the Okavango Delta (and including many of the islands in the Delta itself) Moremi includes delta, forests and savannah, making it a biologically diverse area supporting a high density of wildlife. Animals in this region include elephant, rhino, giraffe, buffalo, cheetah, lion, hyena, wild dog, leopard, zebra and many other species. While we saw many but not all these species during our time in Moremi, we were struck by the amount of game we encountered. Xakanaxa Camp is surrounded by beautiful old stands of trees with hardly any undergrowth. It has an almost park-like atmosphere. The camp is located on one of the main channels of the Delta. Its expensive (in comparison to self-drive camping) but it offers high-end accommodation in an idyllic setting with all the bells and whistles to go. They also offer game drives. I spoke to some of the camp staff who reported good daily sightings of cheetah and lion. 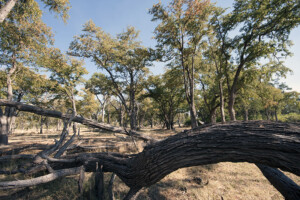 Another 90 minutes (and many animals) later we arrived in Khwai Camp just in time for lunch. Just before entering the camp we had a close encounter with an elephant browsing the trees next to our car. 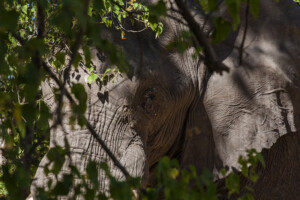 Making our way towards the camp I managed to reverse into a tree. #%*!#!!!! I was so angry with myself. Leo pointed out that at least we weren’t hurt and the car was still perfectly drivable. All together on this trip we would cover almost 8000 km and a bit of damage to the car was a low price to pay. As it turned out, the cost to get it fixed was R12 000 which my insurance picked up. We limped into camp and assessed the damage. The bumper was badly crunched, the right light was damaged (but all the bulbs worked), the fender was compressed, and one of the Jerry Cans was leaking slightly. Although messy, this actually wasn’t dangerous as diesel is not flammable.

North Gate Camp has some large trees for shade, nicely sized campsites, decent ablutions (with solar panels for hot water) and a reputation for wildlife coming into the campsites. For this reason we opted to camp near the ablution block just in case. Like Third Bridge baboons can be a real hassle here – being aggressive, fearless and opportunistic. We also found that at night we could hear the nearby Khwai Village, which perhaps made the campsite feel less isolated than others we had been to. However on the whole we found North Gate a pleasant campsite.

At night I woke to a crunching noise – as if somebody or something was crushing an empty coke can. It stopped suddenly and I went back to sleep.

The next morning we got out of the tent and discovered that we had been visited by a hyena the night before. The noise I had heard was the sound of it crushing my thick thermos mug in its jaws. A hyena’s bite is extremely powerful and can crush a giraffe’s leg bone to get to the marrow inside. It has one of the most powerful jaws in the animal kingdom – so my little thermos didn’t stand much chance. The hyena also got hold of my flip-flops that had been lying next to the ladder. Of these we found only scattered fragments.

After breakfast we left Moremi via North Gate and drove over the wooden bridge separating the park from the Khwai Concession Area.

The Khwai Concession Area is located north of Moremi and sits between this park and the world famous Chobe National Park. It covers around 2000sqkm and is a largely wooded wilderness area. The Concession is run by the local community (many of whom relocated there when the National Parks were designated). As part of an agreement towards establishing Northern Botswana as a haven for wildlife, the community is not allowed to keep cattle and rather centers their economy on safari based eco-tourism. Khwai Village is located just after the wooden bridge and has a basic shop where one can get a few tins, drinks and odds and ends of hardware.

There is a transit road that connects Khwai to Chobe (heading north and then east) and we took this for just under an hour until we entered Chobe itself. From here it was a little distance to Chobe’s Mababe Gate.

From Mababe there are two options to reach Savuti Camp in the north. One is taking the western Sandridge Road that can be difficult to negotiate with deep sand patches, or the more easterly Marsh Road, which is difficult or even impossible to pass when the water levels are high. In general the roads through Chobe are not simple and can be quite tiring to negotiate in parts.

The friendly park attendant advised us that the Marsh Road was in good condition – and so we chose to go that route. The whole drive from North Gate to Savuti Camp is about 110km through beautiful grassland / woodland and later the Savute Marsh. The Savute Marsh is all that’s left of an ancient inland lake, and it seems to experience times where water stops flowing. Until a few years ago the area had a dry spell, but now the water is flowing again and there is an abundance of wildlife. 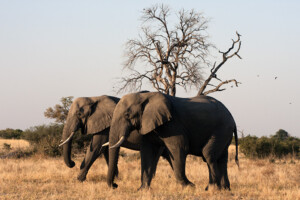 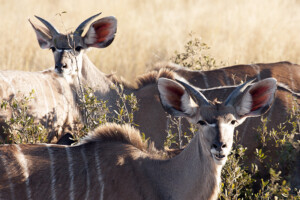 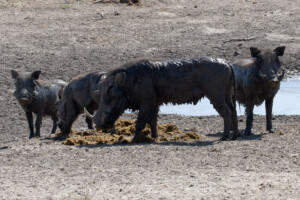 During our drive we saw various animals including warthog, kudu, zebra, klipspringer, tsessebe, wildbeest and a lonesome well-camouflaged leopard. We skirted this beautiful, expansive marsh and took a little detour to a rocky outpost where there are bushman paintings to be seen. After hours of driving we got out and scrambled up the hill – it felt good to stretch after so long in the car. This outpost offered a great view over the plains. 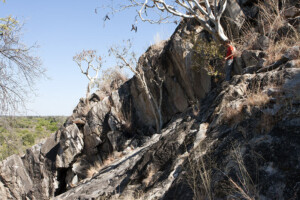 Scramble up the outpost 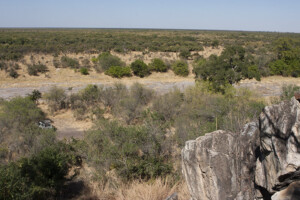 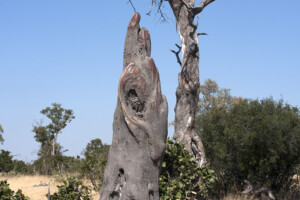 Entering Savuti campsite we found it very dusty, although there are many trees and quite a lot of thick vegetation too. This unfenced campsite offers some good-sized sites and a small shop (which has very limited supplies). The bunker-like elephant-proof ablution blocks offer hot showers and clean and well-maintained toilets. It seems these almost military looking structures were built due to the ellies having destroyed all previous structures to get to the water. This is after all the Elephant Capital of the World. 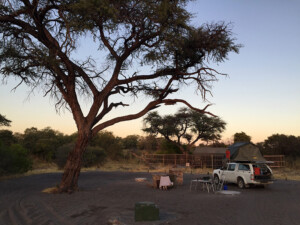 In general we found Savuti to be a good stopover when traversing Chobe. We didn’t see any wildlife in the camp, and not much on the way into the camp either, but it felt good to relax by our fire after a long drive, stretching our legs, sharing stories and listening to the unparalleled sounds of the African bush. 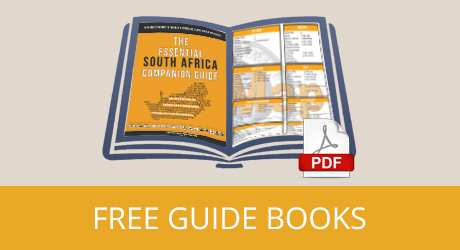